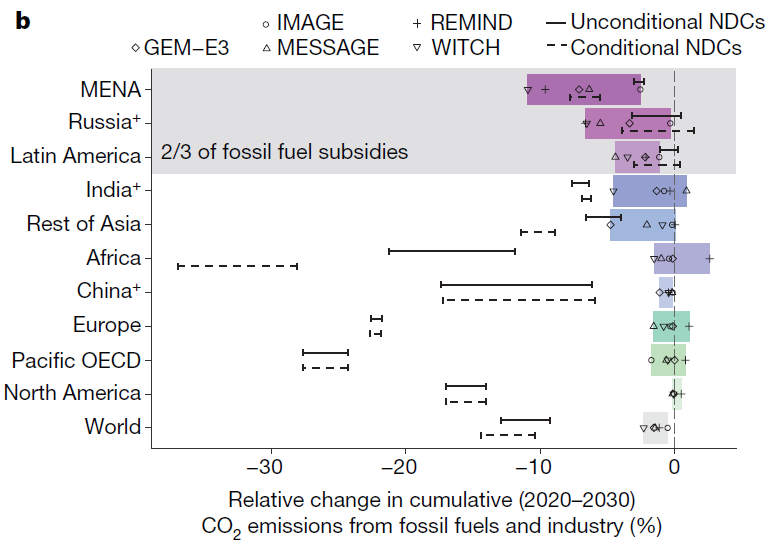 Removing fossil fuel subsidies would have only a small effect on CO2 emissions and renewable energy use, a new research published in Nature has shown. The largest emissions savings would be in oil and gas exporting countries, where fewer poor people would be affected, and subsidy removal can be aided by currently low oil prices.

Fossil fuel subsidies amount to hundreds of billions of dollars worldwide, and removing them has been held up as a key answer to climate change mitigation. Unfortunately it is not the silver bullet many had hoped, IIASA-led analysis published in the journal Nature shows.

Removing fossil subsidies would only slightly slow the growth of CO2 emissions, with the result that by 2030 they would only be 1-5% lower than if subsidies had been maintained, regardless of whether oil prices are low or high. This equates to 0.5-2 gigatonnes (Gt/year) of CO2 by 2030, significantly less than the voluntary climate pledges made under the Paris climate agreement, which add up to 4-8 Gt/year and are themselves not enough to limit warming to 2°C.

“The reason for this small overall effect is two-fold,” says IIASA researcher Jessica Jewell, lead author on the paper. “First, these subsidies generally apply only to oil, gas, and electricity. That means that in some cases the removal of subsidies causes a switch to more emissions-intensive coal. Second, while these subsidies add up to substantial sums of money, the rate per unit of energy is not high enough to have a big effect on global energy demand, which would decrease by only 1-7% after subsidies are removed.” In addition, subsidy removal would not boost renewable energy use significantly, the team found. This is because it is generally cheaper to reduce energy demand than to substitute subsidized fuels with renewables.

Although the global effect on emissions is low, the impact varies between regions. The largest effects of removing subsidies were found in areas that export oil and gas, such as Russia, Latin America, and the Middle East and North Africa. In these regions, the emissions savings caused by subsidy removal would either equal or exceed their climate pledges.

Developing economies which are not major oil and gas exporters would generally experience much smaller effects of removing the subsidies. Some of the models used even suggested a rise in emissions for some regions, such as Africa and India, as a result of switching from unsubsidized oil and gas to coal.

Subsidy removal and the poor

The regional differences highlight one very important aspect of subsidy removal that needs to be taken into consideration: the impacts on the poor. Many fossil fuel subsidies were put in place to help those with lower income, and despite the fact that most of the money goes to the rich, the poorer you are, the more of your household budget comes from these subsidies, so their removal would have a much larger impact on daily life.

For instance, removing subsidies means that the switch to modern fuels may become out of reach for many poor people, the results show. As a consequence they are stuck using firewood or charcoal, which both emit more greenhouse gases and are damaging to health.

Fortunately, the highest numbers of poor people are concentrated in the regions where removal of subsidies will have the weakest effect on CO2 emissions. Removing subsidies in richer oil and gas exporting regions would therefore provide significantly greater emissions savings and have a less detrimental impact on the poor. This is facilitated by today’s low oil prices.

“The governments of oil and gas producing countries are already under pressure to reduce spending on subsidies as revenues shrink,” says Jewell. “This provides a unique political opportunity to remove subsidies in countries where it will have the largest effect on emissions and the smallest impact on the poor.”

Ultimately, these results do show benefits of removing fossil fuel subsidies, especially in certain regions, but care is needed for implementation. “We’re not saying: don’t get rid of subsidies, we’re saying that we need to be aware that it might have less of an effect than hoped, and it could have a disproportionally large effect on the poor,” says Keywan Riahi, study co-author and IIASA Energy Program director. “But well-designed policies can achieve subsidy removal without affecting the poor. A scheme being trialed in India, for example, removed subsidies on cooking gas in general but continues to support the poorest households through rebates.”