How many can we be?

How many can we be? 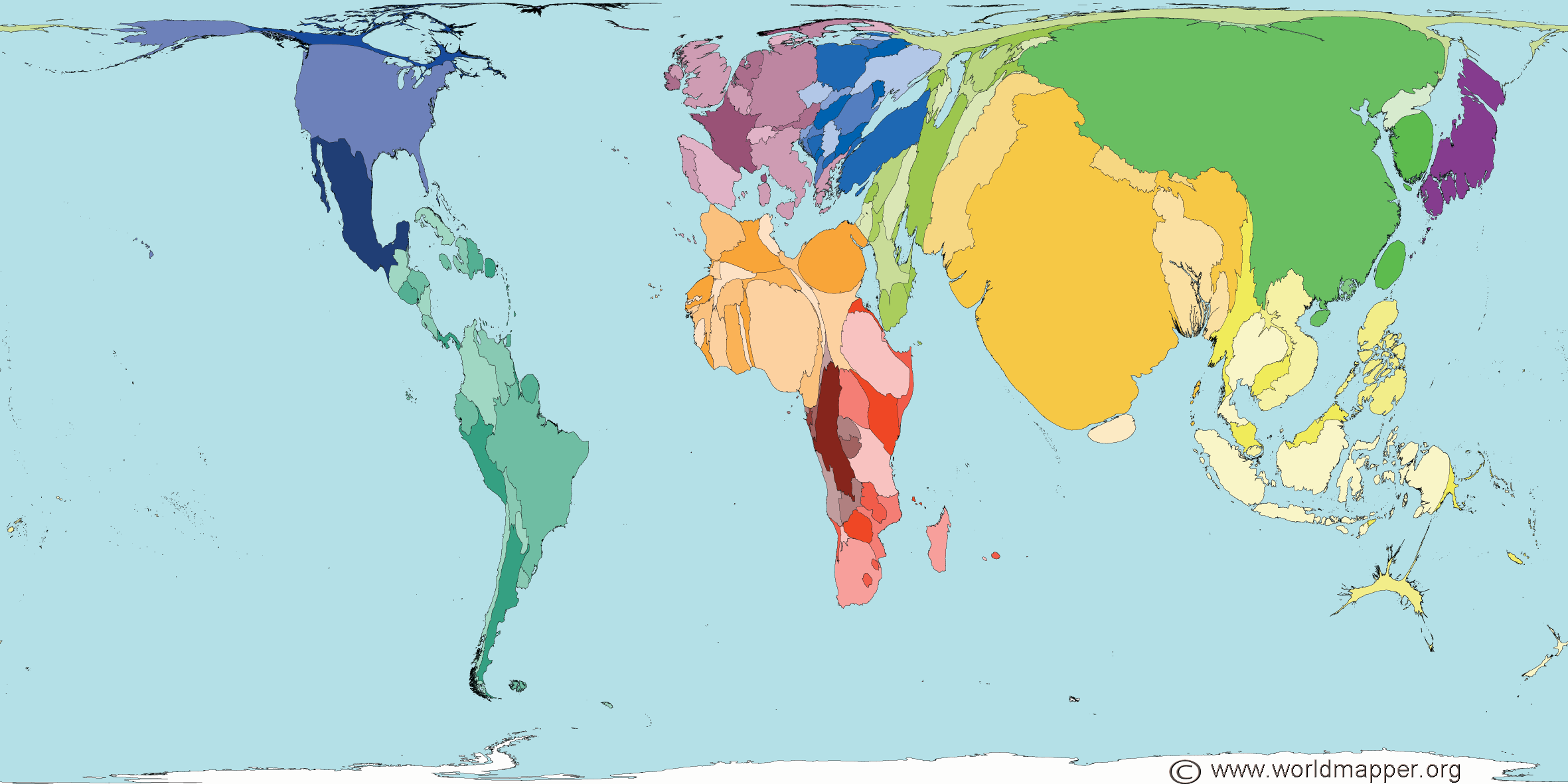 The central topic of today’s TEDx is ‘overcrowded’: so when I was asked to give a talk on this topic, I started thinking about it, and asked myself the simple following question: ‘How many can we be’?

How many we can be in this room? That’s an easy one. The maximum occupancy rate of this room is 120 people, and it is so nice to see that the full room is taken today. But the question at the back of my mind, of course, is a much more complex one. How many we can be on this planet? To answer it, or better to think about it, we need to go on a journey through time, both in the past and in the future.

Our story begins with the agricultural revolution, 10 thousand years ago.

We were only 2 million at that time, but that moment changed everything, because agriculture has allowed us to settle down and grow in number. At the beginning the growth was relatively slow, but by the time of the Pharaons in Egypt, we were already 20 million. 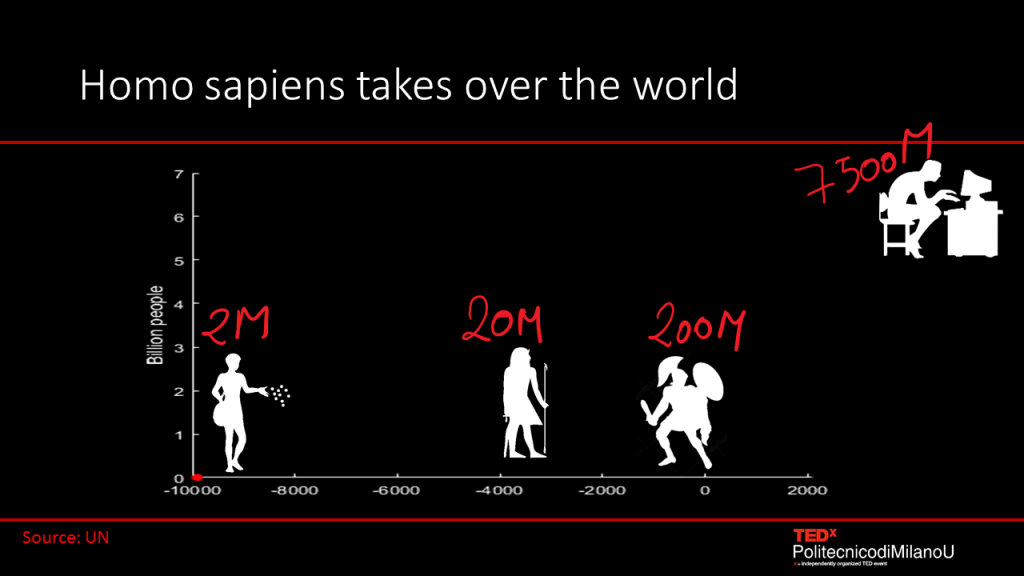 It took another few thousand years to become 200 million people, at the time of the Roman empire. Since then things have become unstoppable. One century ago we were 2 billion, and today we are 7,5 billion people. We are still growing… by about 2.4 persons per second. How many will we be this century?

Lastest estimates say at least 9 billion, but possibly many more.

In the past 200 years we have literally taken over the world, growing at an unprecedented rate… and for some aspects, we have been remarkably successful. Take for example the number of chronically poor people, the people who have hard time making a living, and earn less than 1$ a day, the poverty line. Today 700 million people live in absolute poverty. That’s a big number, and poverty eradication is certainly one of the great societal goals of our era. But luckily it represents 10% of the world population while only a century ago the vast majority of people were poor. 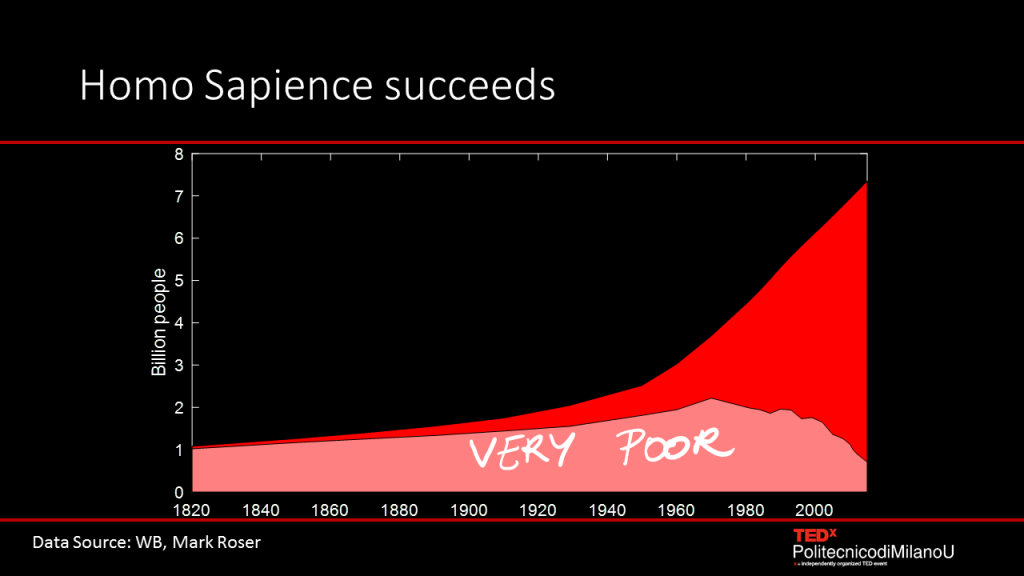 Poverty has declined by 3 times in the past 50 years, largely thanks to the economic growth of China. Still, this is an unprecedented result in the history of humans since the agricultural revolution. What has been the main reason behind this change? Many of course are the drivers. Population growth itself is one, and education and knowledge are certainly key factors.

If we want to summarize the technological revolution which has allowed us to prosper, I think there is one technology which sums it best. Energy. We need energy for everything we do, including for writing and reading this article for instance.

Energy has always been very expensive in human history. Not any more.

Energy is now affordable by most. ‘Let there be light’, not in the biblical sense, but thanks to the technology we humans have developed. Look at the map of the earth by night. Where there is people, and there is money, there is light… while until very recently, since the dawn of time, when the sun set down, darkness came, and only fires could helped. This has changed. Except of course for the many who cannot afford access to energy.

All in all, this is a great story. But is it really so?

In building our own empire, we have polluted it too. Look at the beautiful and at the same time terrifying satellite images of NASA tracking CO2 emissions around the world.

We need a lot of energy to run the world, but unfortunately this energy is coming from fossil fuels, because they are the richest source of energy. Burning fossil fuels and changing land use creates CO2 emissions which add to the atmosphere. CO2 moves around the world following the patterns you see here. One ton of CO2 emitted here now is the same as one in New Zealand. You can see where CO2 comes from: places with people and economic activity.

The southern hemisphere also emits CO2, but you don’t see it here because it is summer there, and in this period trees suck up CO2. Land and oceans are indeed capturing about half of the CO2 we are putting in the atmosphere. So nature is helping us a lot, by reducing the amount of CO2 which remains in the atmosphere.

But the other emissions will remain forever. You can think of it as plastic in the air…

What are the consequences? Well, the consequences are relatively well known. Science is unequivocal about it. The planet is warming up, as you see here in the records since we began to track temperatures.

Temperatures have been growing, and especially so in the past few decades.

We are already at more than 1 degree Celsius of global warming. If emissions continue at projected rates we are on our way for 4 degrees of warming in this century. This is average temperature over land and sea. It is well above what scientists indicate as critical thresholds, such as the 2 degrees limit. What is it going to happen? 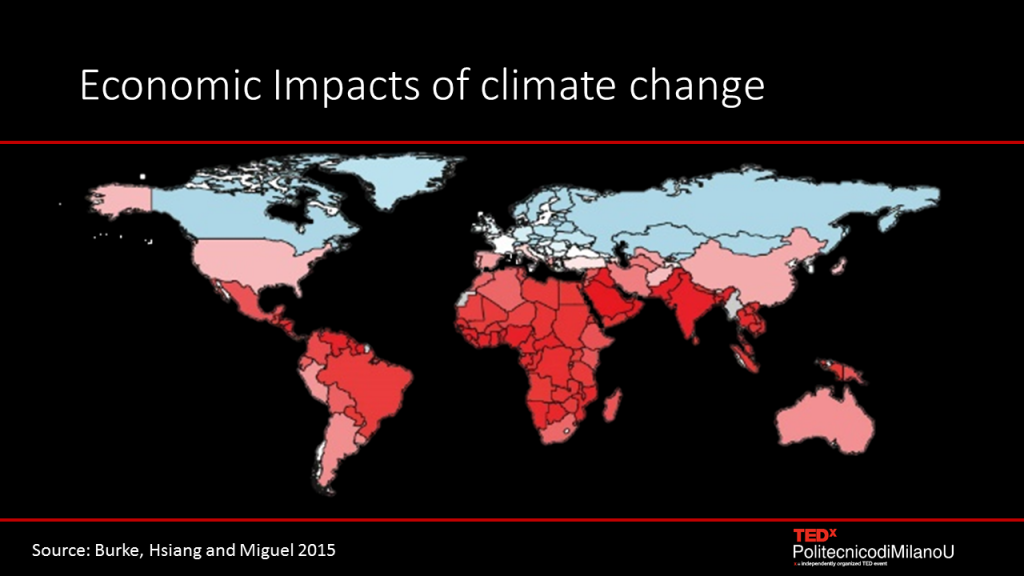 A lot of things will happen, Climate change will impact agriculture, health, ecosystems, tourism, energy, pretty much every activity… but many of the impacts are not well known. In order to understand some of them, in my work …

I collaborate with scientists and economists around the world to map the risks of climate across future scenarios about climatic, economic and technological variables.

The great number of future scenarios we generate indicate that climate change will amplify risks in a major way. It might even trigger catastrophic events which could be irreversible. Managing climate will thus mean managing unprecedented risks and uncertainties. Another clear outcome of our research is that climate will hit different countries differently. Already now global inequality is a major social issue but climate change will furthermore exacerbate inequalities between countries.

Indeed, recent estimates suggest that the countries which will suffer the most might be those lying between the tropics, because it is already hot there and because of the way their economies are organized. You can see it in this map where red means high costs. These are countries which are already among the world poorest, and most troubled. Climate change can make them even more so.

Most importantly for the topic of today, these are also the countries were most of the additional people which will be living on the planet will be concentrated over the century. The population of Africa alone is expected to grow by 1.6 Billion, while another 600 million will be added to South and South East Asia. 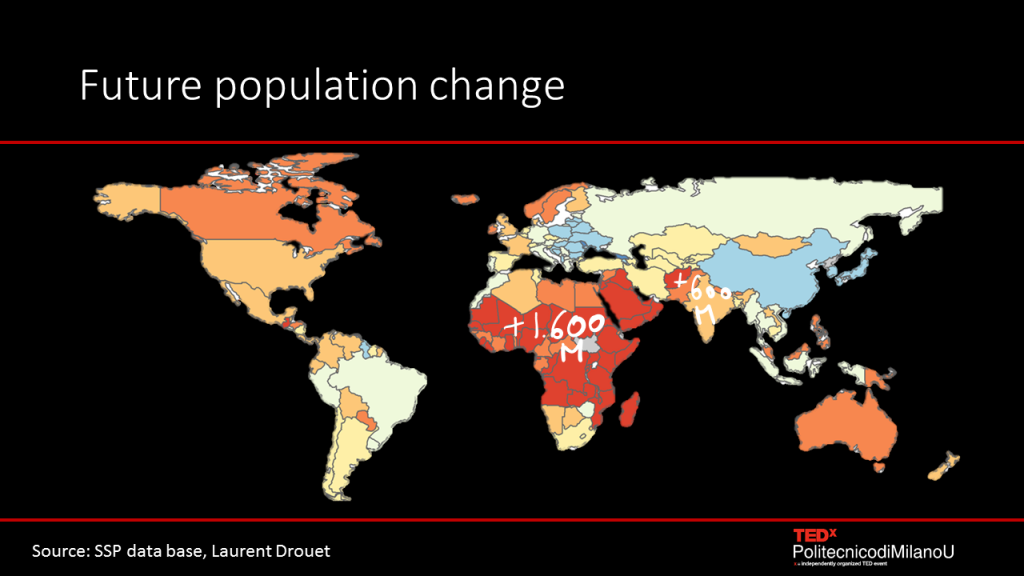 That’s a lot of more people, in countries which are poor and which as we have seen will be impacted the most by global warming. Already now we see the consequences of conflicts in nearby countries such as Syria, through the migrants who reach (or do  not make it) to our shores and the troubling political ramification this is having. It is hard to imagine the consequences of climate change impacts on such a large population. The question of course, is can we avoid it and if so… what can we do?

Here there are some positive news, finally you might say…

We have many ways we can reduce CO2 emissions. Clean energy –including renewables- is advancing rapidly, and it is now much more affordable than only just a few years ago, though still more expensive than fossil fuels. Energy efficiency via smart homes, big data and new technology –as we have already heard of today- can significantly lower our energy demand. To make these options effective, we need public policies in terms of carbon pricing or regulation, which unfortunately we are not seeing in many countries, even in the most polluting ones such as the US.

There are two additional ways to deal with the climate problem which are not commonly discussed.

One is by lowering consumption, and-or by lowering economic growth. We know this quite well in this country, and it has not worked at its best. The other is by controlling demography, the topic of this talk. We rarely hear about this, because it is a tough choice. I myself have three sons, even if I was aware that having kids is probably the most important environmental decision in one life. But can we solve climate change and other environmental issues without at a minimum discussing population? How many can we be then?

I am afraid I have no single, or simple, answer.

There are only different futures. With different consequences. We can foresee a world inhabited by at most 9 Billion people, decreasing after the year 2050. A world in which people receive education, both primary and for many also secondary. 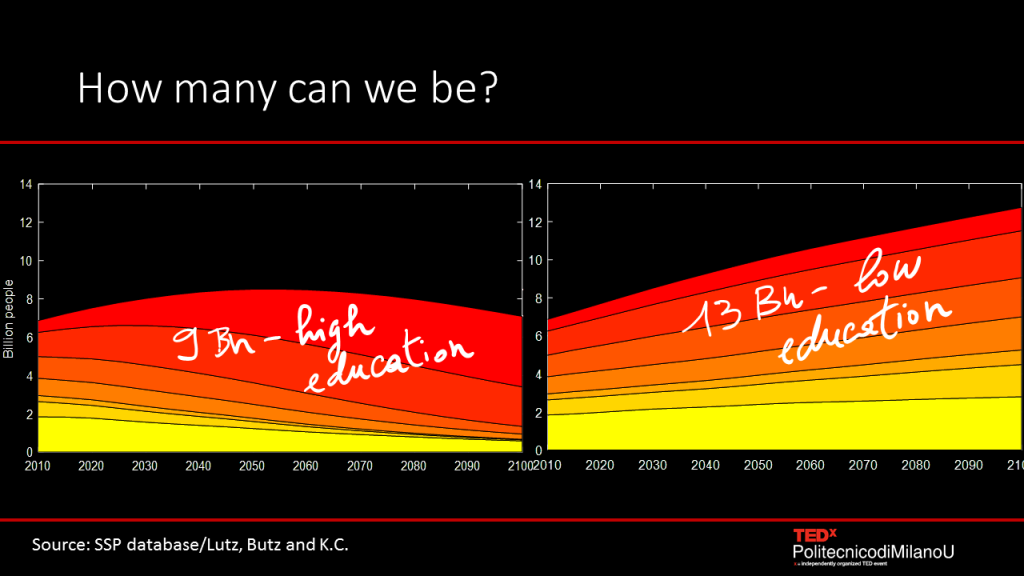 Education is very much linked to population, but also to economic growth, and it is a key determinant of the value we give to things like the environment, and the care we want to have for our planet. Or we might live in a world with 13 Billion people, with many of them with no access to decent schooling and secondary education. The two worlds would look very different, and it is up to us to decide which way to go. Of course, it is mostly up to the new generations, and to all the people living around the world.

It is indeed a collective decision.

We would like our planet to be bigger, so that more people can live on it without disrupting it, or that our atmosphere is bigger, so that we can emit more CO2 without having consequences. Unfortunately, we should remind ourselves that we have only one earth. And that it is a beautiful one, when compared to alternatives…